I’ve spent a lot of time with organizational leaders over the past thirty years, and there’s one thing I know. Leadership can be a heavy burden, especially when the work of leaders is accomplished from on top of the mountain. That, I imagine, is lonely work.

I was lucky. When I served as the executive director of Hope Meadows, I was the “leader” of a neighborhood of children, parents, and seniors—not an organization in any typical sense of the word. We were an intentional neighboring community, a village of residents from every kind of background—some who had actually run large corporations and knew a lot more than I did about leading an “organization.” (Retired, they were living at Hope in order to care for one another as extended family.) My board of directors had put me “in charge” of the community I had founded, and of a small administrative, maintenance, and professional staff—an assistant, a grounds keeper, some therapists, social workers, a bookkeeper, etc.. But there was nothing “top-down” about Hope Meadows— and nothing traditional about my “leadership.”

It would have been impertinent of me or my staff to believe we could lead this community in any kind of traditional, authoritative way. Our goal was for all of us— both staff and residents—to establish a sense of connectedness and neighborliness based on working together toward a common purpose, within a special place, and with a like-minded group of people. This enabled us to establish collaborative, trusting, friendly relations that allowed the residents to operate and to grow into “relational leaders,” regardless of age, ability or background, a concept advanced by Kenneth Gergen in his book, Relational Being:  Beyond Self and Community.

While leadership denotes the characteristics of an individual, relational leading refers to the ability of persons in relationship to move with engagement and efficacy into the future. It is not the single individual who is prized, but animated relations. If significant movement is to take place within an organization {or community], it will emerge from the generative interchange among the participants. To be sure, individuals may be designated leaders, but the process of leading is ultimately relational.

Of course, I had considerable responsibilities at Hope Meadows — so did my staff.  But most of our work was indeed relational with the community, doing it in the spirit of, as Gergen writes, collaboration, empowerment, dialogue, horizontal decision-making, sharing, distribution, networking, continuous learning, and connectivity.

The work of relational leadership at Hope was not always easy.  We’d all been steeped in top-down thinking and acting. For many of the staff, they imagined themselves in a hierarchy, with me at the top and each one of them operating out of their status and expertise—the way they’d always worked, a view that minimized the power of community as an effective intervention into social problems.  It was my job to change the lens through which we saw ourselves and the residents of Hope, and guide us all to a different way of living and working together. This kind of transformation happens over time, in daily relationship with one another. It changed us, and the healing that occurred wasn’t only in the highly vulnerable children and families we formed our neighborhood around, but in each and every one of us.

Even the seniors, many living the last years of their life with serious health issues (cancer, multiple strokes, heart disease, etc.) often said their years at Hope were the best of their life. Why? Because, like everyone else, they knew they were highly valued and cared about. Miss Irene, age 77, who moved to Hope to “care for the children,” loved to tell the story of Leon, age 6, asking her out to a movie.

It was maybe 7 p.m. and the doorbell rang. Standing there was Leon and his little hand was filled with copper coins. You know how your hand sweats with copper in there, and he had a dollar’s worth. He said he wanted to take me to the movies. It was his idea. All during the movie he asked, ‘Are you comfortable? Do you feel all right? Are you enjoying it?’ It was priceless. I’ll never forget it. It was my first date in 13 years.

The residents of Hope Meadows, including Irene and Leon, never imagined themselves as leaders vital to building community and achieving Hope’s goals. Yet as they formed caring relationships with each other and engaged in service to the community, they were integral to its success and to the happiness and wellbeing of each other. Through these relationships everyone became a leader. 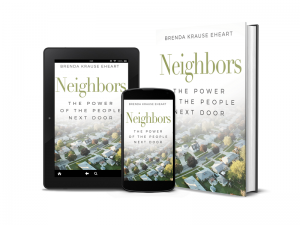 Brenda Krause Eheart is a leading authority on intentional neighboring. It was her research while at the University of Illinois that led to her breakthrough idea to create intergenerational communities where vulnerable people can reengage within a supportive environment while also engaging in service to others. In 1994, in response to the ravages of the crack epidemic in her state and its impact on families and children, Brenda started Hope Meadows, an intergenerational community created to support families adopting children from the foster care system, and spent ten years as its executive director. She went on to found Generations of Hope, a nonprofit dedicated to enhancing the lives of vulnerable populations by tapping the transformative power of intergenerational community living through intentional neighboring.